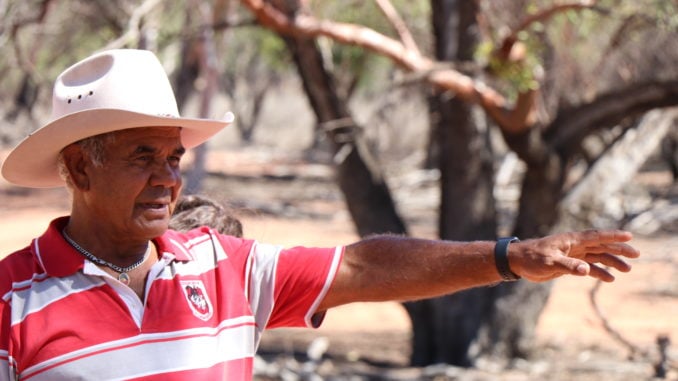 First published by the National Indigenous Times on 18 April 2018.

Precious Aboriginal artefacts estimated to be hundreds of years old have been returned to the traditional Budjiti owners in north-western New South Wales after having been used as garden ornaments.

Budjiti elder Phil Eulo said the return of about 20 plates, grinding stones, axes and message sticks on Tuesday was cause for celebration for his people.

The artefacts were discovered by not-for-profit conservation group Bush Heritage when it took on management of the 14,000ha Murray-Darling Basin property, Naree Station, which it does in consultation with the Budjiti people.

The artefacts had been used as ornaments at the homestead gardens of the former pastoral property, Bush Heritage’s Aboriginal Engagement Officer Sarah Eccles said.

They were collected up and stored for return to the traditional owners when Bush Heritage took over.

A special ceremony attended by about 40 Budjiti people was held to smoke away the bad spirits and welcome the good spirits and to pay respect to the ancestors at Naree.

The artefacts were returned to a special place chosen by the Budjiti people.

Mr Eulo said he hoped a small display cage could be built around them so that animals would not disturb them and so that children could visit the site and learn about their importance.

He said the Budjiti people would also like to know the secrets of the message sticks — their language has all but been wiped out, with his Aunty Ruby, 83, being the only one who can speak a few words.

However, they hold hope that it can be revived through archived records and other sources.

“Back in the ’50s when I was growing up our elders were not allowed to teach us anything about our culture,” Mr Eulo, 70, said.

“I felt like it wasn’t the right thing to do today, me talking in English, to my people.

“But it’s all good. We’ll pick up the language. We’ve got to chase that down. It’s got to be somewhere in the archive.

“Aunty Ruby is the eldest in my family, she’s the only one left, she knows a few words of just about animals and bush foods and stuff like that.”

The ancestral lands of the Budjiti people span two states along the Paroo River from far western NSW and over the border into Queensland.